ISFJs are always looking for others’ well-being (sometimes at the expense of their own), which is why they make reliable friends, partners, and employees. Moreover, they are very serious individuals who maintain a composed manner in most social situations. As such, from an outsider’s perspective, an ISFJ person may look like they are taking life a bit too seriously.

Still, this doesn’t mean they don’t have a sense of humor or that they don’t get silly sometimes – it’s just not for everyone to see and enjoy. ISFJs can be (and often are) incredibly funny. However, they don’t get silly unless they are in the right company and atmosphere. In addition, they don’t want to make anyone feel uncomfortable, so they’ll adapt their funny side according to the people surrounding them.

Not sure what your personality type is? You can easily find out if you take our comprehensive personality test.

As humans, we tend to associate a good sense of humor with confidence and high levels of intelligence. However, who decides what good humor is ?

Each personality type has a different view on what they find funny. For instance, an INFP personality is more likely to have an odd sense of humor that goes over people’s heads at times. In contrast, ENTJs can be a bit outrageous in their comedy and enjoy watching people react to their edginess. On the same note, someone with an ISFJ personality profile may appreciate or practice humor that feels a bit dry and goofy to other personality types.

In addition, there is a slight difference between someone with Assertive traits and someone with Turbulent traits. In the case of the ISFJ personality type, ISFJ-A people retain a higher sense of confidence, while ISFJ-T people are more likely to make fun at their own expense (practice self-deprecating humor).

Since they are serious about life and the way their behavior influences others, ISFJs may seem a bit uptight. In fact, a good way to describe their sense of humor is by using this phrase: Lord let me be more laid back, and help me do it exactly right!

Self-deprecating humor is not out of character for the ISFJ personality type, but they use it to point out funny flaws in their own behavior. Also, they can be a bit arrogant at times (a bit like the INFJ type) and tend to be sarcastic (similar to the ISTJ personality). However, the ISFJ sense of humor is never mean-spirited or cruel (they would never intentionally hurt people’s feelings).

It’s also important to remember that The Defender is still an introvert. True, they are not as socially awkward as some other introverts on the personality type spectrum (looking at you INFPs!), but when it comes to humor, they can get shy. In fact, you can only see the true humorous colors of an ISFJ when they feel completely comfortable in your presence.

Also, there are situations when they don’t know they are funny – at least until the audience burst out into laughter. This makes their type of humor feel more natural and free from any attention-seeking.

Since their personality can be a bit contradictory, there are plenty of ISFJ memes on various social networks and platforms. We did a bit of browsing (which was rather enjoyable and fun) and selected some of the best memes for your pleasure. Of course, we’ll also mention the best locations to find amazing and fresh ISFJ memes.

Did you know there’s an official ISFJ Reddit community ? People who contribute share lots of cool things about themselves and their ISFJ partners, friends, family, and acquaintances. As such, the content is funny and engaging for both ISFJs and people who want to learn more about them and their humorous side.

Here’s one cute ISFJ meme that’s funny because it pokes fun at one of the negative traits of this personality type: 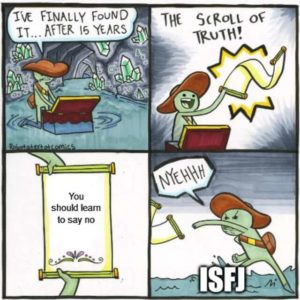 Pinterest is famous for its visual aspect and board-based organization system that’s extremely attractive for detail-oriented people like ISFJs. Of course, you don’t have to be passionate about organizing things into cute, neat boards to use Pinterest, but it’s easy to see why certain personality types (especially the ones with a strong organizational ability) love this platform so much.

When it comes to the ISFJ sense of humor, a quick search will reveal a plethora of pins and boards, like the one designed by one user named Stefenie Miller. Also, just to give you a bit of insight, here’s an ISFJ meme you can find while browsing her pins: 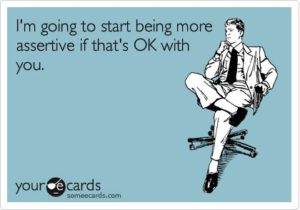 Facebook may not be as popular with younger generations, but it still has its supporters (millions of them, actually). Furthermore, its format allows users to create all sorts of content (video, text, image, and, yes, memes).

The ISFJ Memes page is a nice source of inspiration and relaxation for all the 16 personality types, but we’re sure the sarcasm and dry humor will be extremely appealing to ISFJ types.

ISFJ Quotes & Other Forms of Humor

The Defender personality is rather shy when it comes to expressing their goofy side, which is why they often seem serious and distant. Still, when the atmosphere is right, they love joking around and can appreciate puns and even dark humor.

However, if there’s one way you can truly understand The Defender’s view of the world, it’s through quotes that are extremely relatable for the ISFJ person.

Here are five quotes from famous people that will provide anyone with a bit of insight into the beautiful and vast inner world of The Defender’s witty side: