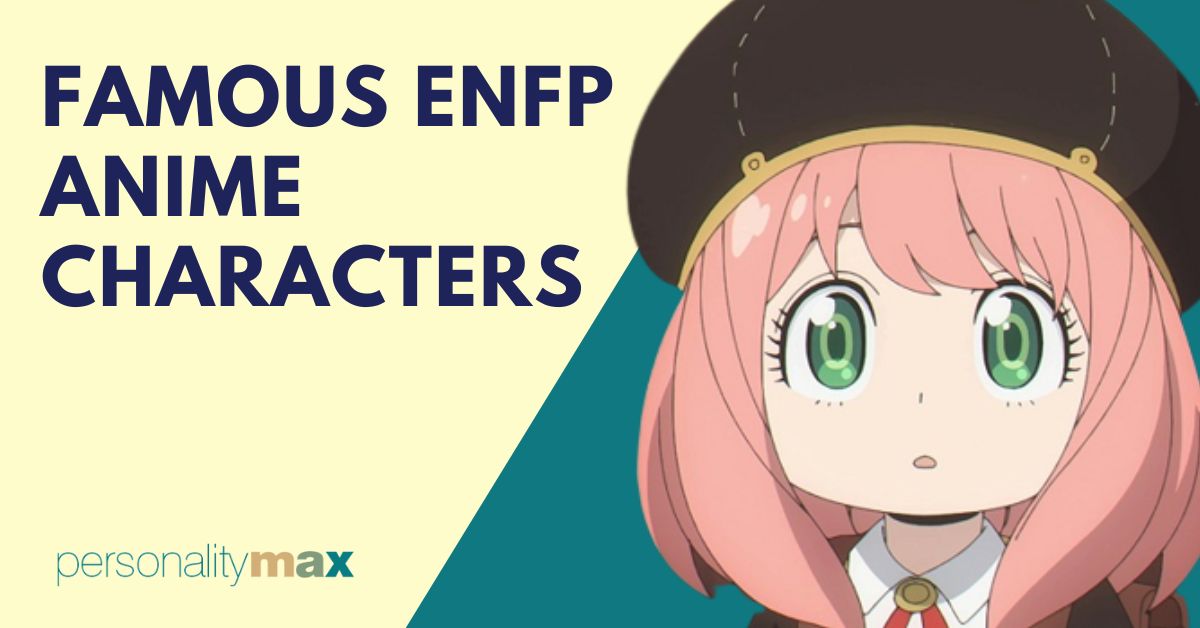 If you’re lively and energetic and describe yourself as a free spirit, you might find yourself identifying with the ENFP personality type, which stands for Extroverted, Intuitive, Feeling, and Prospecting. This personality type has strengths such as curiosity, passion, and perceptiveness. However, some of its potential weaknesses include being disorganized, optimistic to the point of naivete, and people-pleasing.

There are many famous people, both in real life and in fiction, who display traits of the ENFP personality. These include Jennifer Aniston, Drew Barrymore, Oscar Wilde, and Chris Martin. Fictional characters displaying the ENFP personality include Michael Scott from The Office, Bridget Jones from Bridget Jones’ Diary, and Willy Wonka from Willy Wonka and the Chocolate Factory.

But, what about anime? Read on to learn about the most popular anime characters who display ENFP personality traits and how these personalities affect their lives and relationships.

From Naruto Uzumaki in Naruto to Yui Hirasawa in K-on!, there are many ENFP characters in anime series that are energetic and passionate. However, some also display potential weaknesses associated with this personality. Naruto was a jinjchūriki from the day he was born, which means that he has a tailed beast sealed within him. As one can imagine, this resulted in him being shunned by most of the ninja village of Konoha when he was a child. But, he worked hard to gain people’s respect. He chased his dream to achieve Hokage, a title given to the leader of the village. As a result, he became a strong, talented ninja.

From the first moment that we meet Naruto, it’s clear to see that he’s energetic and lively, which are common traits associated with the ENFP personality. He has a verbal tic and ends his sentences with “Dattebayo!” when his emotions get the better of him.

However, he can be quite naive. He sometimes takes a bit of time to grasp certain situations or concepts. Although he’s naive at times, which can be viewed as a potential drawback of this personality type, Naruto is highly observant, he frequently displays that positive ENFP trait. He not only notices things that others don’t but collects and retains information extremely well.

Although he’s got some quirks, for example, his fussy eating habits, Naruto has an appealing personality and people are drawn to him. This has resulted in him having loyal, strong friendships.

Naruto works hard to achieve his dream but to help him continue on his path, he created his own nindō, or personal rule, which is that of keeping his word. This has given him self-confidence, so he feels he can reach his goal no matter what happens. Anya is a telepath whose remarkable abilities were created during an experiment conducted by an unknown organization. She’s also a student. She longs to be part of a loving family as her previous family is thought to have abandoned her. She fears that others will discover she’s a telepath and avoid her, which has resulted in her carrying lots of emotional baggage.

Although she doesn’t have great social skills and struggles with communication, such as when she is honest to the point of being hurtful because she can read people’s minds, she is very kind and empathetic towards others. This can be seen when she helps to calm down a cow after she realizes that it’s frightened and also when she jumps into a pool to save a drowning child.

Her telepathy can be seen as an extension of the perceiving trait of the ENFP personality. However, a potential weakness linked to this strength is the tendency to be disorganized.

This weakness can be seen in Anya when she struggles to control her telepathy. For example, she can’t be around large crowds of people because she reads everyone’s thoughts and becomes overwhelmed to the point of experiencing physical side effects, such as headaches, dizziness, and nosebleeds.

Another potential weakness of the personality is people-pleasing, which Anya can display. For example, her friend Becky criticizes her for not standing up for herself when she’s bullied by Damien. However, we can see that she displays people-pleasing tendencies as she desperately wants people to love her because of her difficult and tragic past.

Josuke is the eighth JoJo of the series and a man who suffers from retrograde amnesia. His mission is to learn about his former identity and the people who were associated with him.

Interestingly, he possesses personality traits from both of his identities and sometimes is quite emotional. At other times, his logical mind shines through and he has the ability to analyze situations, as well as strategize to achieve his goals.

Although he can be quite violent, Josuke is loyal to those he cares about and will defend them. Josuke tries to form deep bonds with others.

He can be quite disorganized, sometimes, he doesn’t know how to handle mundane things in life and can be completely oblivious to them. That said, he displays laser focus in subjects that he really loves, such as plant species.

An ENFP trait that Josuke displays is excellent perception, which takes the form of strong vision. He can describe the dimensions of objects far away with great accuracy. He also has a wide field of view as he can see movement on the ground even when he’s not looking straight at it.

He’s also quite curious and explores a variety of topics, such as mathematics, a subject in which he displays excellent skills. This talent is evident when he easily solves a trigonometry problem with ease.

Haruhi is a student and the leader of the SOS Brigade, a club that strives to find time travelers, espers, and aliens. She’s antisocial and doesn’t have any interest in connecting with who she defines as “ordinary” humans.

She doesn’t realize her exceptional abilities, which include being able to change and reshape reality. If she wanted to, she could create a closed space, or new world, which would prevent destruction in the real world.

She does, however, want to live an extraordinary life. She doesn’t like what she thinks is “normal” behavior and she engages in deviant behavior because she becomes bored quickly. This causes her to want to find stimulation. She creates lots of adventures to prevent boredom, and her high level of energy has caused others to describe her as a boxer looking for a fight. She’s energetic and athletic and works hard to succeed.

What’s interesting about how she helps others who are in need is that she does this because she craves adventure, so it’s not really about being selfless or altruistic.

That said, as the series develops, she becomes more sympathetic to others and feels that she has a responsibility towards SOS Brigade members and ensures that they are looked after.

Although she can be melancholic at times, she’s highly optimistic, which is a common ENFP trait. People are drawn to those with ENFP personalities, and this can be seen with Haruhi, as she’s quite charismatic. However, she doesn’t always rely on her charisma—sometimes she persuades others to do what she wants them to do by using blackmail or intimidation. This shows that for some people, being happy and optimistic can sometimes be a disguise.

Marin is a cosplayer and otaku (someone who has obsessive interests) who loves magical girl anime and video games. She is fun and enjoys cosplaying as various characters. She is cheerful, bubbly, and kind, as well as non-judgmental. This makes her appreciate Wakana, a boy who is seen as socially awkward. She doesn’t try to hide their friendship and really wants to connect with others.

Marin is also highly loyal to Wakana, as shown when she tells him that he should defend himself against those who try to take advantage of him. Although people with ENFP personalities can be free-spirited and fun, they do take their relationships seriously, and Marin is an example of this. She also displays the ENFP trait of wanting to help people reach their potential.

We see a display of her loyalty and how sensitive she is to Wakana’s feelings when Wakana goes the extra mile to get her Shizuku-tan outfit completed, which is a difficult task because she isn’t clear about when she needs it to be finished, and she feels bad. She cries and apologizes to him.

Although she can be quite mature, Marin is messy and easily distracted. For example, she doesn’t follow step-by-step instructions to knit a prototype of her cosplay outfit, which results in a failed item. She also procrastinates, for example, by indulging in anime instead of doing her work.

Yui is a vocalist and lead guitarist of the Ho-kago Tea Time band. She is always in search of fun and is fearless. For example, she doesn’t experience stage fright and is highly extroverted. She’ll hold hands with and hug people easily, without any hesitation or feelings of social awkwardness.

She also finds it easy to relate to people. She’s the type of person who’ll easily walk up to people and become friends with them instantly, even if they don’t seem to have common ground. She tries to include everyone, which shows that she’s social and extroverted, both of which are common ENFP traits.

Although she is passionate about being on stage, she is quite lazy and doesn’t perform well in school. Because she’s so focused on her music, she tends to forget about everything else. She can’t multitask to save her life! But, her involvement in music has made her quite popular and she is admired for her singing voice.

Yui leads by intuition. For example, instead of studying user manuals, she relies on her intuition and is self-taught. She is easily bored, which makes her want to find her own path when learning things according to her own rules.

Typical of ENFP personalities, Yui is quite messy. Although her bedroom is clean, this is because her younger sister keeps it tidy.

Chika is a high school student, a secretary of the Student Council, and a member of the Tabletop Gaming Club. She’s a bubbly and energetic girl who always presents a smile to the world.

She loves having fun and is always keen to brainstorm activity ideas to keep her entertained and boredom at bay. She has Extraverted Intuition, which can be seen in her creative games and her ability to think up lots of possibilities simultaneously.

Sadly, some people see Chika as simple-minded, partly because she has an easy-going attitude and can be viewed as childish at times. Beneath her fun-loving appearance, however, Chika is a talented pianist and can speak five languages.

She doesn’t always have a good read of a situation and can sometimes fail to read the room. This can cause her to ruin other people’s schemes or plans. That said, she is perceptive about relationships, and this could be because she is interested in them to the point of being obsessed with love.

There are many anime leads that give out strong ENFP energy and these are some of them:

There are lots of ENFP anime characters that create interesting storylines in their respective series. Whether they’re brainstorming creative ideas or connecting with people, they’re eager to please and chase their goals. The potential drawbacks, however, are that they can experience a lack of focus or seek others’ approval.