Learning which Enneagram personality type you are can help you understand more about your character and why you make certain choices. In addition to your core personality type, your Enneagram wings can further influence your moods, reactions, feelings, fears, and motivations.

If you’re an Enneagram 5, your wings will be either Type 4 or Type 6. In this article, we’ll be looking specifically at the 5w4. Type 5s with a 4 wing tend to be more in touch with their own emotions than other Type 5s are capable of or perhaps willing to be. At their best, they combine a fierce curiosity and love of intellectual pursuits with emotional intelligence and imagination that makes them a force to be reckoned with. Read on to find out more about this type, including key traits and directions of growth and stress. 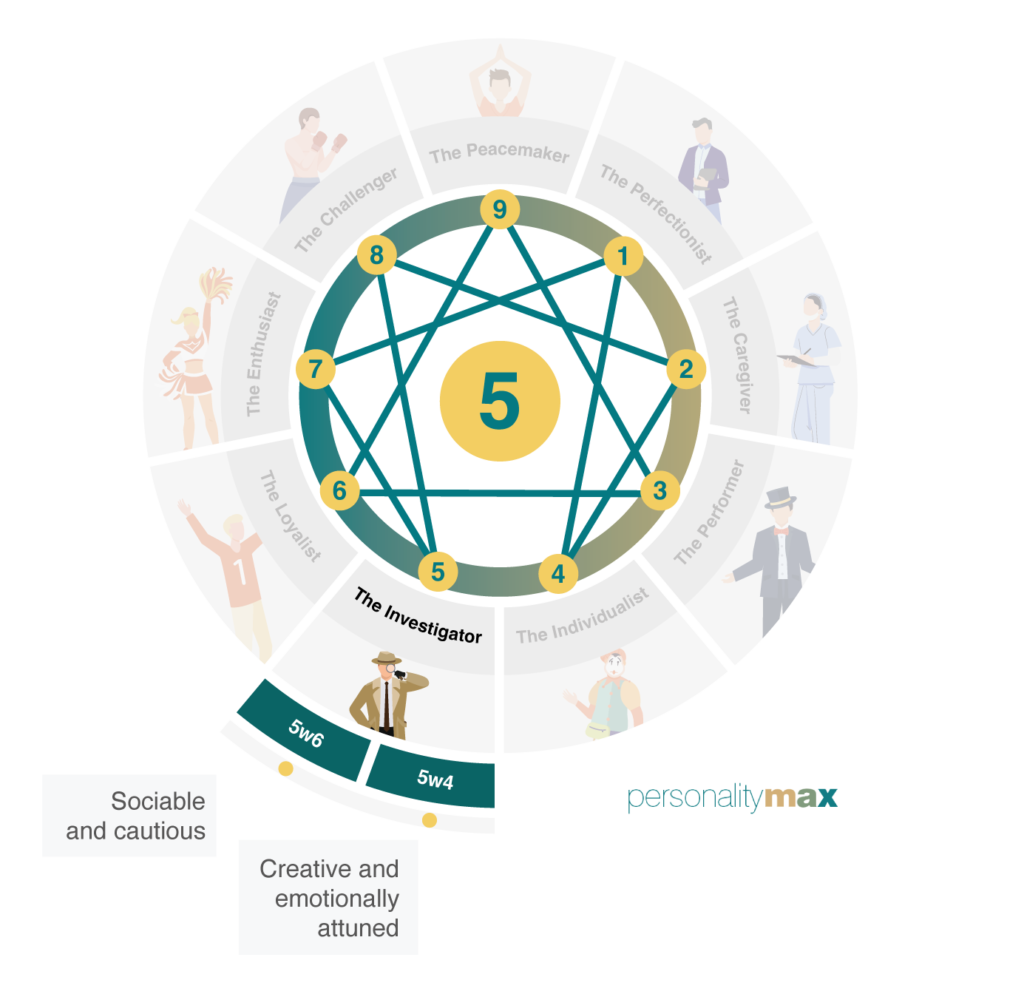 Below are some of the characteristic traits of an Enneagram 5w4.

At heart, a person’s Enneagram type is a description of their core motivations, the specific desires and fears that sit at the root of their behavior. Let’s examine the core motivations of 5w4s.

5w4s fear being incompetent. They push themselves to develop a thorough practical and emotional understanding of the world to head off ever having to feel inept in navigating it.

5w4s desire to feel capable and like they are contributing. They want to advance their knowledge and skills like all 5s, but they specifically wish to do so in unique and imaginative ways that expand human understanding.

Like all Type 5s, 5w4s tend to be bright, intellectually curious, and eager to expand their horizons. With their 4 wing comes an increased attunement to their own emotional world, which often lends them a natural talent for the arts and enables them to express their emotions through creative means. At work, they’re motivated by the work itself and acquire new skills with ease.  This makes them valuable employees who require little supervision and find creative solutions to problems they’re presented with. And because they combine their creative drive with an insatiable curiosity and a vast store of accumulated knowledge, their artistic works tend to be truly unique.

Where all Type 5s have a tendency to retreat into their own world, 5w4s can be particularly withdrawn, sometimes to the point of actively avoiding being around other people. They have a difficult time with group work and rarely seek help from others, assuming they can think their way through any problem. However, their tendency to intellectualize everything often leaves them deep in analysis paralysis as they try to consider every possible response even as the situation becomes dire and requires immediate action. Because they are more attuned to their own emotions than other Type 5s, 5w4s are also more sensitive to feelings of rejection or embarrassment, which is part of why they have a hard time being around others. 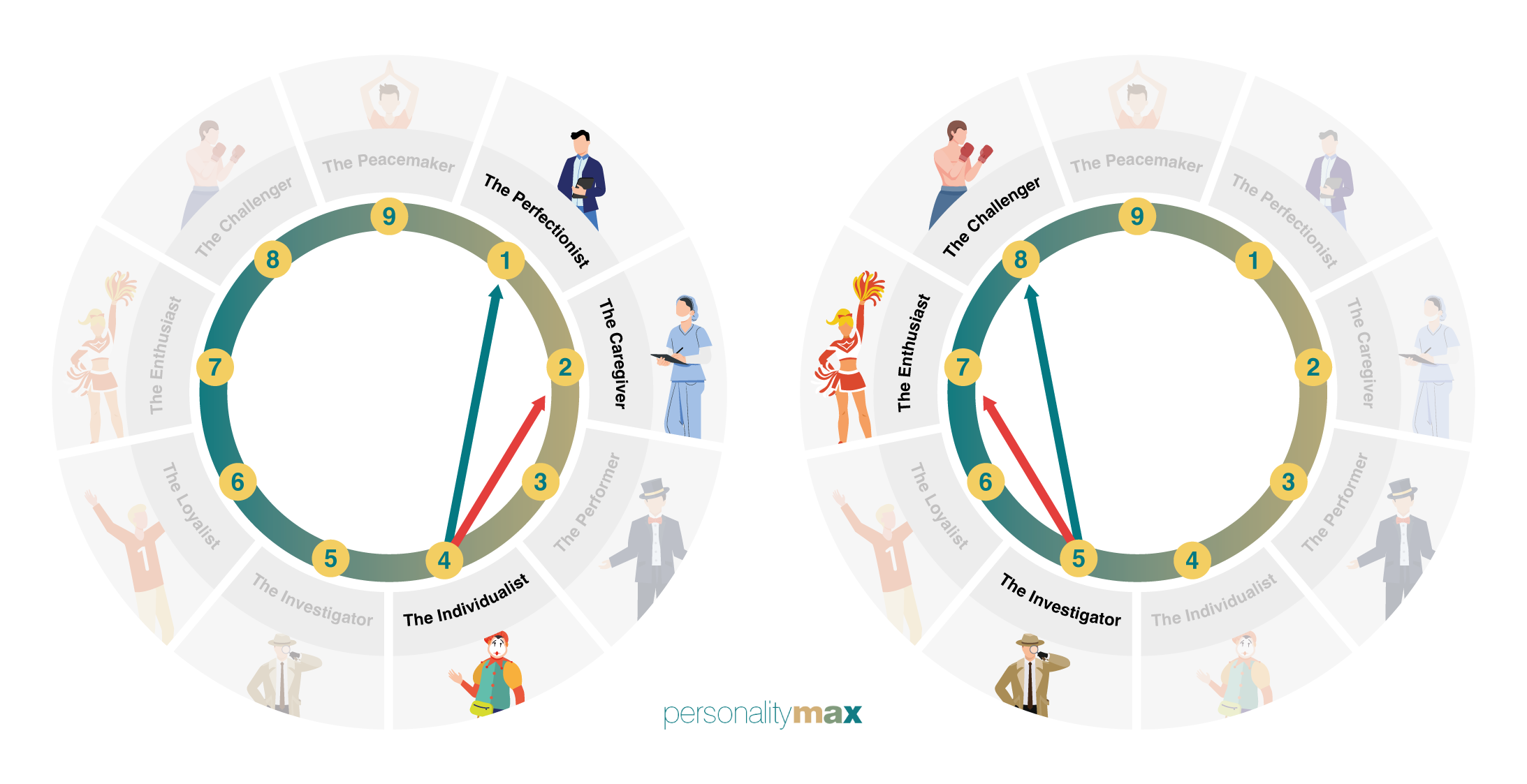 The nine Enneagram personality types are not rigid descriptions of behavior. A person’s base type may not change, but they will take on traits from other types in response to changing circumstances in their life. In the Enneagram diagram, each type is drawn and connected to two other types. These connections show that type’s typical direction of “movement” in response to new circumstances, one which they follow in times of growth and the other in times of stress.

Growth Arrow to Eight and One

Like their core type, 5w4s take on positive behaviors of the Enneagram 8 during times of growth. However, the nuances of their behavior differ due to their Type 4 wing. And especially if the wing is particularly dominant, they would display the positive behaviors associated with Enneagram 1.

5w4 Enneagram types will, in times of personal development, take on most of the traits of Eights (Five Integration). This means they might:

The positive effect of Ones (Four Integration), could result in them:

Stress  Arrow to Seven and Two

Like their core type, 5w4s take on negative behaviors of the Enneagram 7 during times of stress. As with their growth arrow, the specific nuances of a 5w4’s behavior under stress are informed by their wing. Like in growth, the level of influence of the wing depends on its dominance. A strong Four wing would result in these types taking on the less amenable qualities of Enneagram 2.

5w4 Enneagram types in stress would find that Sevens (Five Disintegration) have an influence, and they would tend to:

Because of the influence of Twos (Four Disintegration) might:

Because people change in response to life circumstances, there is no single defined set of behaviors that mark out an Enneagram 5 wing 4. They will display different facets of their personalities in their average state versus at times when they feel healthier or more unhealthy.

Signs of a Healthy 5w4

Signs of an Average 5w4

Signs of an Unhealthy 5w4

Notable public figures believed to be Enneagram 5w4s include:

Enneagram 5w4s are creative people that combine the pursuit of knowledge of the Type 5 with the emotional introspection of the Type 4. These individuals have vivid imaginations and find novel approaches to whatever they pursue. When they follow their creative impulses their ideas can be grand and innovative, but they can also quickly become impractical and outlandish.

When stressed, 5w4s can find themselves constantly overthinking, getting bogged down with possibilities, and retreating into fantasy and distraction, all of which can often lead to bad situations getting worse as they remain paralyzed by indecision or avoidance. They must learn to focus on the here and now and find ways to take decisive action when it becomes necessary.

Wanna know more? To find out your own Enneagram type, take the Enneagram Test here.