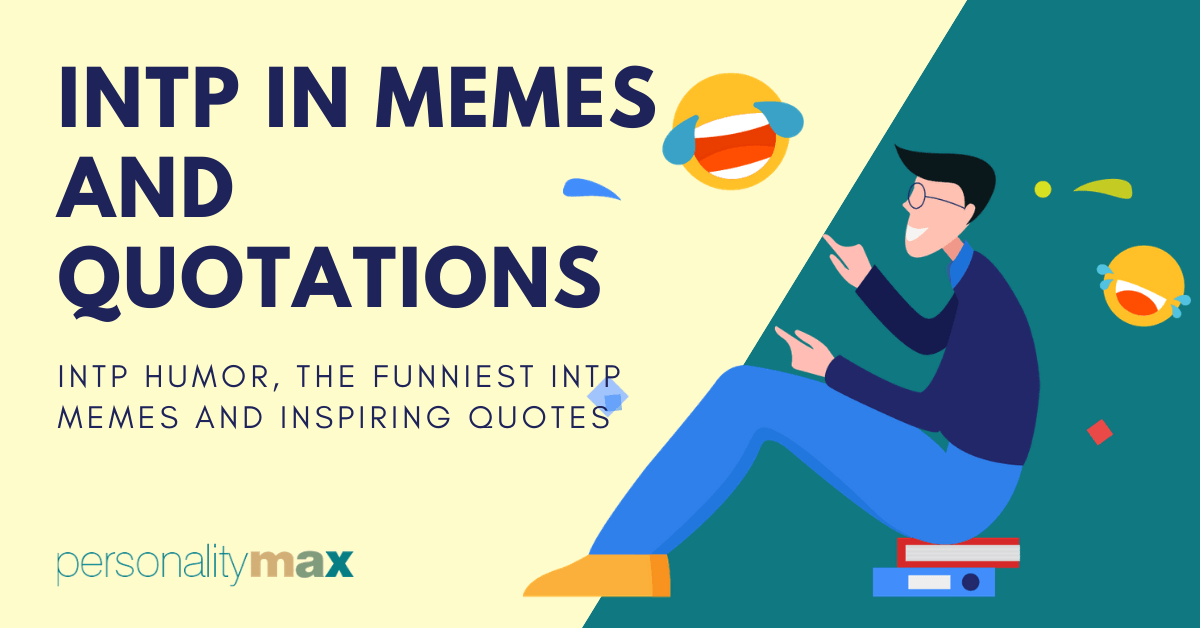 The Logician (INTP) is an Introverted (I), Intuitive (N), Thinking (T), and Perceiving (P) personality type. As an inventive type, INTPs live primarily in their heads, and they’re often absorbed with their internal thoughts. Their ability to form creative connections and see the bigger picture allows them to produce unique insights that are backed by logic. Ultimately, INTPs are in search of clarity, and they may have countless theories and explanations that they’re constantly improving. The INTP personality type is introspective, private, and independent, they prioritize rational analysis over subjective emotions. Although they prefer mentally oriented activities, they’re usually easygoing, with a diverse sense of humor that ranges from sarcastic to silly.

Not sure what your personality type is? You can easily find out if you take our comprehensive personality test.

There’s an abundance of memes that circulate online about all the 16 personality types, including the INTPs. In fact, INTP memes are among the most well-known in the 16 personalities community– needless to say INTPs love coming up with them! A running stereotype about INTPs is their tendency to get distracted easily. Although INTPs can hyperfocus on projects that they’re interested in, they typically follow wherever their curious minds take them, regardless of plans or schedules. For example, an INTP might stay up excessively late at night because they’re researching a random topic that caught their attention.

A popular subject for INTP memes is their emphasis on logical accuracy, for the Logician is keenly aware of inconsistencies. INTPs put in a great deal of effort to be precise with their words, and so they can be very particular about the words used by other people too. They don’t hesitate to correct someone when what they’re hearing doesn’t add up. Since they communicate in a direct, matter-of-fact way, they expect the same from others, rarely entertaining underlying meanings.

Reading about humor can give insights about the inner workings of any of the 16 personalities. In this article, we decided to take a look at the quirky INTP through the lens of humor and quotes they resonate with.

Each personality has a different sense of humor given their distinct personality traits and preferences. The INTP personality leans towards sarcasm and dark humor, with a fondness for surrealist jokes. Since the way INTPs see the world is complex, their sense of humor reflects the same. Compared to most other personality types, INTPs enjoy jokes that make them think and give them a burst of insight.

INTPs think of themselves as neutral or objective observers. With everything that’s running through their mind, they have interesting perspectives on otherwise mundane things, catching nuances that most people would miss. It’s common for them to use these as material for jokes. Instead of going with a formulaic line, INTPs would rather spontaneously make a funny comment about a situation while they’re right in the middle of it. They’re aware of the absurdity of otherwise ‘normal’ things. Their humor when combined with their bluntness, makes the INTP personality type a natural at satire.

INTPs also have a biting wit. When they’re comfortable enough, they can engage in instantaneous wordplay, and are drawn to people they can banter with. INTPs may even love teasing their friends or poking fun at them in a light-hearted way. Their sense of humor can be subtle because they typically prefer delivering their jokes with a straight face. For the Logician, the content of the joke speaks for itself and they would rather let others figure it out by themselves than them having to explain it in detail. And so, their humor may be best appreciated by those they’re close to, given the familiarity with their mannerisms. In their close relationships, INTPs may even devise inside jokes that only the other person can understand.

More than a few INTPs could relate to chuckling at jokes inside their head without ever having spoken them out loud. With their Extroverted Intuition preference, INTPs can notice surprising connections between ideas, hence their sense of humor is extremely creative. Getting to know an INTP person can be a real treat–and one reason is their unique, wacky lines that can get you laughing and thinking at the same time.

You can find the individual humorous profiles of each personality type here:

INTPs are drawn to dark humor partly because they like pushing boundaries and questioning conventions that seem arbitrary to them. They’re generally unafraid to seek humor in irony, and can have a skeptical, irreverent streak. They rarely get offended, so they don’t mind jokes that are more on the sarcastic side. Unpredictability also appeals to them–they appreciate clever one-liners with surprising twists.

Here is a taste of what the INTP personality finds funny:

Many INTPs are active in the online world. Given the INTP personality type can be incredibly rare, it may actually take less effort to find them on online forums and social media. A huge collection of memes in the 16 personalities world can be credited to the INTPs, who also make memes about other personality types, aside from their own. In fact, INTPs generally love sharing memes, articles, and videos. Memes about INTPs are extremely popular, and they can be found on different websites all over the internet.

Following, we list the best hubs for INTP memes (and have also included our favorite meme from each):

Reddit is a network of communities that are based on people’s interests. These are called subreddits, and Reddit has at least 130,000 active subreddits out of a total of 1.2 million. There are numerous subreddits devoted to the 16 personalities community, including r/mbti and r/mbtimemes. The INTP subreddit (r/INTP) has more than 100,000 members and makes new posts almost every day. To go straight to the memes, check out r/INTPmemes. 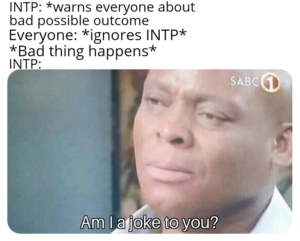 Pinterest is an image sharing service where users can save images and links that match their preference on pinboards. These pinboards have a specific theme or topic, and users can also follow pinboards that cater to their different interests. Since Pinterest is a visual-heavy platform, it’s helpful for finding personality type memes. You can easily find INTP memes from all over the internet by typing “INTP” in the search bar. Some INTPs have even created their own pinboards dedicated to their personality type, with plenty of relatable content. 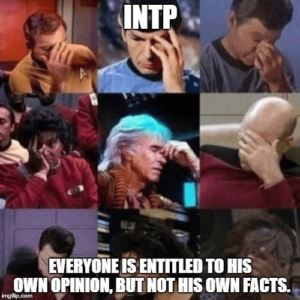 Twitter is another social media platform that’s favored by INTPs. A microblogging service, Twitter excels at sharing information through concise tweets, ranging from latest news to personal life updates. What makes it powerful is how fast tweets can spread–when someone reposts a tweet, more users in their network can share it too. Thanks to this feature, many INTP memes have gone viral. Looking up “#INTP” will bring up several of the latest INTP memes. 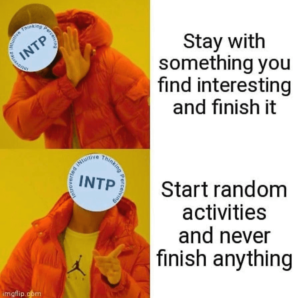 INTPs may march to the beat of their own drum, but they’re intrigued to hear about others who share a similar mindset as them. They particularly look up to people who exhibit competence, independent thinking, and a sharp intellect. Here are some quotes that INTPs could relate to, as well as quotes by famous representatives of this personality type.

Quotes INTPs can relate to

INTPs are a personality type that is the most concerned with objective truth and rigorous thinking. At the same time, they never believe that what they know is set in stone–instead, they constantly refine their thoughts based on new information. Here are some quotes that perfectly encapsulate the life philosophy of this personality type.

We have a great article if you’re curious about INTP celebrities and fictional characters – we’ve written an entire article on the same. However, if you want to read some quotes by famous INTPs, this is the right section to do so.