The 9s, also known as the Peacemakers, desire nothing more than peace and harmony. They are gentle and amiable people who focus on others, support the environment, and avoid conflict. 9s are typically tuned into what others want but have no clear sense of their own ideologies.

Although they appear agreeable, 9s actively oppose external control. They dissociate from their anger or other unpleasant emotions instead of feeling them. These feelings then occasionally appear in large bursts or repressed forms.

They despise being supervised but appreciate a well-organized hierarchy. They are skilled mediators because they can see arguments from multiple perspectives and identify areas of agreement. They are also optimistic, dependable, and kind.

9s are the third member of the body-based triad of the Enneagram, which also includes 8s and 1s.

Below are some of the most notable characteristics of the Peacemaker.

The Enneagram delves deeper into the characteristics of each type by considering our desires and fears, gaining insight into our actions.

The Enneagram asserts that personality traits are merely coping mechanisms that are ultimately pushed by particular fears.

The Peacemakers’ biggest fears are conflict and being separated from others.

Each Enneagram type has corresponding desires that are deeply interconnected with their fears.

The Peacemakers’ biggest desire is to create harmony in their environment.

By using the Enneagram, we can see how our personalities develop and alter throughout time. Depending on their personality, a person reacts differently in different circumstances.

These changes are divided into two categories—direction of growth and direction of stress. 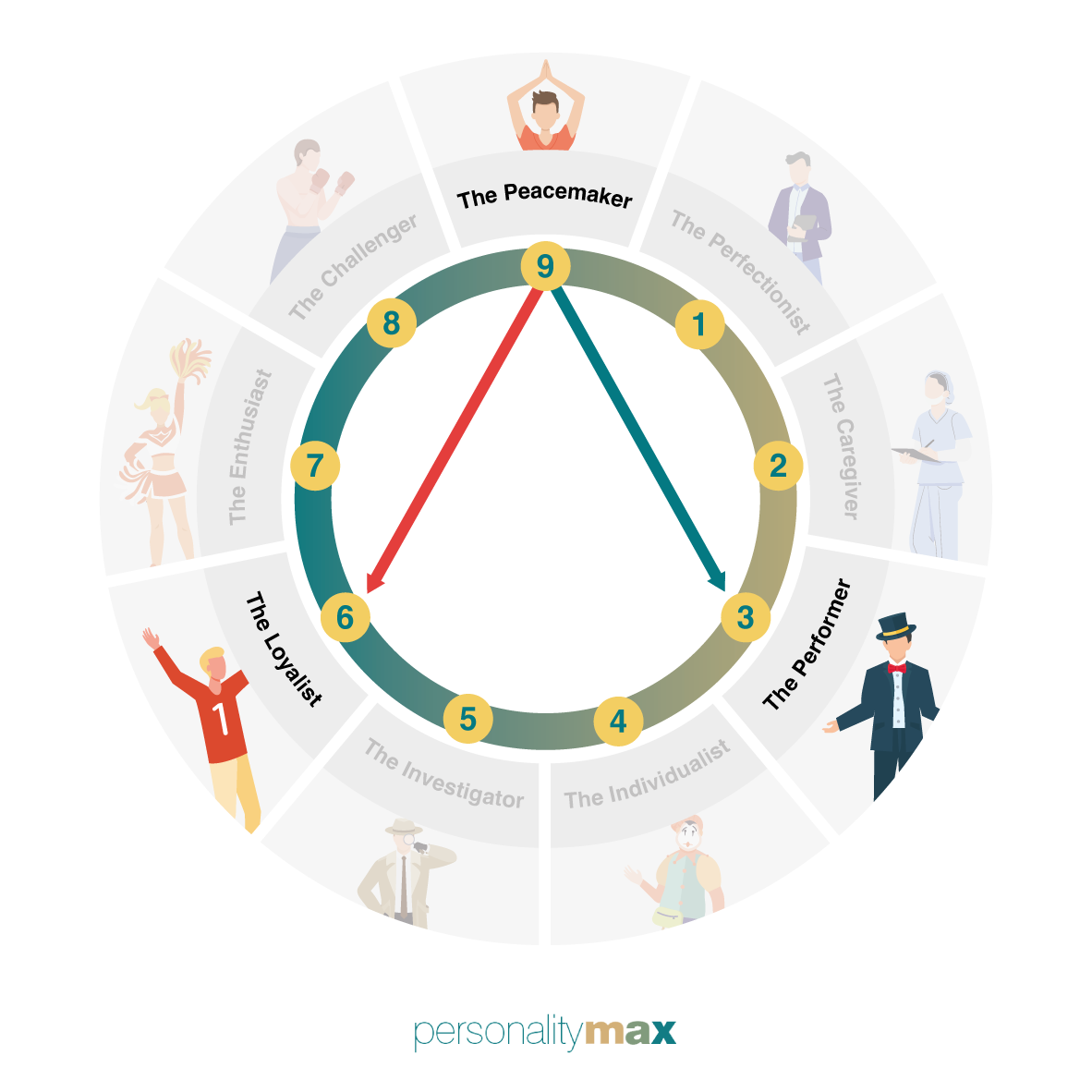 The 9s acquire the positive qualities of the 3s as they are in the stages of growth. Know that the Peacemaker is still an Enneagram 9 at the core, but they can use and benefit from adopting the positive traits of Enneagram 3s in their own way, while in a growth stage.

An Enneagram 9 in the direction of growth will:

When 9s are stressed, they take on the negative traits of 6s.

They start to take on the negative traits of the Enneagram 6s, but they will still be an Enneagram 9 at their core.

An Enneagram 9 in the direction of stress will:

Self-preservation, sexual, and social instincts are the three types of instincts. Knowing your Enneagram subtype can help you better understand how you will react instinctively to situations, people, and life in general.

SP 9s are probably the most laid-back 9s, but they also need time alone, away from other people’s opinions and needs. They look for comfort in familiar routines and a welcoming, uncomplicated environment to feel comfortable.

SP 9s are also reserved and favor nonverbal communication. They frequently portray themselves as less knowledgeable than they are—almost as if they want to be taken for granted so they can be left alone. On the plus side, they are patient, have a keen sense of reality, and are wise.

Social (SO) instinct influences our need to be part of a larger group and community and to feel like we belong.

SO 9s look for a sense of well-being through friendship and social interactions. Because they are typically more extroverted, active, and engaged in their surroundings, they may not always seem like 9s. SO 9s express their love and warmth more than other 9s. They serve as the social glue in many organizations and groups because of their tendency toward idealism and their support of causes.

SO 9s do however, continue to be oddly oblivious and unaffected by other people’s problems, even when participating in social interactions. They are drawn to places where they feel like they can fit in, but they also keep themselves separate—typically by keeping a distance emotionally while still being outwardly friendly.

Many SX 9s look for fulfillment by merging with another entity. They seek harmony not only with all that is beautiful and natural but also with unique and perfect companions. However, SX 9s have many concerns about merging too profoundly with another person and losing their identity, resulting in them sometimes coming off as emotionally conflicted and ambivalent—much like a 4 or 6.

Occasionally, they will try to solve the tension between their desire for union and their need for autonomy. In this case, they will be in two relationships at once, each serving a different purpose, and they never give their all to either one. This can lead to arguments, which 9s try to avoid.

Knowing if a person is performing in a healthy, average, or unhealthy range is essential for understanding them and ultimately, helping them. It’s essential to remember that after all, people are changing on a daily basis. One day your best friend might be smiling, feeling at peace, and offering hugs to everyone at the office. The next day they might be unstable, resistant, and refuse to talk to people at all.

Signs of a Healthy Peacemaker

Signs of an Average Peacemaker

Signs of an Unhealthy Peacemaker

The Enneagram wings are the number types next to the core type. So, 9s can have either an Enneagram 1 or 8 wing. 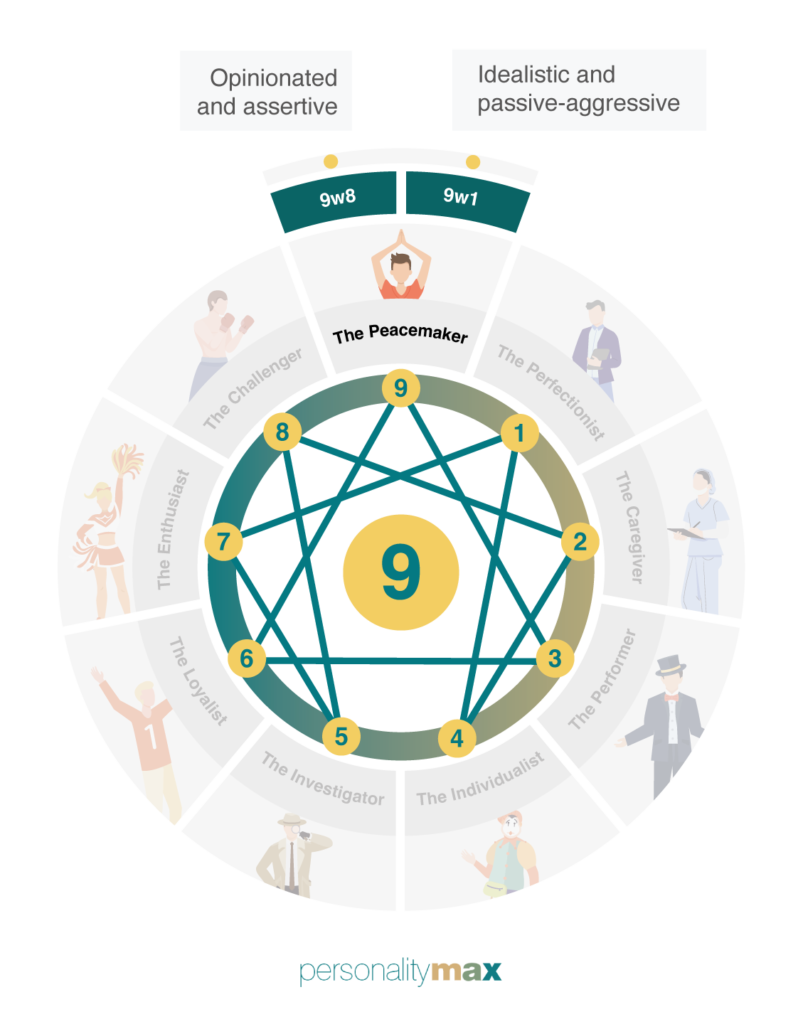 The goal of a 9 is to find satisfaction in the lives of others or the world at large. Enneagram 8s are extremely self-aware and will retaliate violently if they feel their personal space has been invaded. As a result, 9w8s seek to increase their influence on the broader world and safeguard themselves from potential threats.

As a rule, 9w8s prefer to go their own way and get angry if their independence is challenged; otherwise, they have no problem wandering wherever they please. Furthermore, they can be fiercely protective of their friends. The 9 part of their personality allows them to merge with others, and the 8 part of their personality views any attack on friends as a direct assault on themselves.

Compared to a 9w8, 9w1s are more likely to suppress their anger. They struggle to communicate their needs and desires, leading to resentment that festers before erupting. They might work very hard to understand what others want, so if others don’t put in the same effort, they might feel angry. But instead of facing their anger head-on, they may try to deny it or divert it into other activities.

They are more likely to value others’ well-being than a 9w8 will, and are generally more outgoing. A 9w1 is much gentler than a 9w8, and they often make good team members. The 9w1 is arguably the most tranquil of all the Enneagram types.

9s will likely flourish in a profession that encourages stability and consistency because of their calming nature. They need to feel like they are making a difference, so they will do well in occupations that support this.

9s also need to feel as though they are easing the stress and problems of others. They are motivated by giving others confidence and receiving praise. As a result, slower-paced occupations that encourage social interaction are likely to be successful for them.

9s may become passive-aggressive or completely avoid challenging situations if they are not properly supported, making them unlikely to thrive in competitive and fast-paced environments.

People with an Enneagram 9 tend to gravitate toward the following careers:

Enneagram 9 Compatibility With Other Types

Both 9s and 4s are intuitive and emotional, making their connection easy and comfortable. Each partner brings something unique to the partnership—the 9 brings calm, non-confrontational acceptance while the 4 brings vivacious creativity and genuine expression.

Compared to the 9s predisposition toward self-neglect, the constant outpouring of honest, genuine speech from 4 is both motivating and admirable. 4s have the power to bring out the passion and openness in 9s, while 9s may help 4s feel like they belong in the world.

Although 9s and 6s are very different, their pairing is easily one of the most stable and common relationships. Both types desire to live based on reliable, strong principles and to be rewarded for their hard work. They rarely disagree and they are able to see things from many angles. These different approaches to preserving balance serve as the foundation for a 9-6 relationship’s strengths and weaknesses.

9s and 6s tend to lead predictable, routine lives and have a strong desire to follow the rules. 6s are aware of probable dangers, calamities, and problems that are unavoidable in a given situation. They spend a lot of time considering how to preserve security. 9s, on the other hand, are laid-back, dependable, trusting, and optimistic. 9s often foster serene settings that are accepting and understanding.

Enneagram 9 is least compatible with another Enneagram 9.

A 9-9 pairing’s consistency and predictability could be the very thing that destroys their romance. They may be wary about changing the status quo or allowing anything to disturb the calm and peace of their world. Despite their outward friendliness, they tend to be isolated and easily lose connections with others.

It can be challenging for 9-9 couples to communicate about serious challenges, due to the need they feel to maintain harmony and peace. After a period, they may no longer communicate much, even though they may still be in love. Most of these feelings will go unspoken and stay in their heads. If they keep quiet about their true feelings, the relationship may suffer from passive-aggressive behavior.

Many Type 9 personalities and characters can be found all over the world. 9s are friendly, diligent workers who bring tremendous stability to any situation.

Since 9s value stability and peace above all else, they are likely to make an effort to be open and receptive to others’ perspectives. They want to avoid any possibility of conflict because they cherish peace and predictability.

They must remember that they can’t be united with anyone else until they’re united with themselves. They will eventually lose the other person in their relationship if they are too accommodating, simply because they will never have learned to value themselves.

When 9s realize that asserting themselves is constructive rather than destructive, they will be in a position to bring true peace and harmony to their communities.