Enneagram Type 8s, also known as the Challenger, is preoccupied with authority and control. Challengers are self-motivated, capable, and fearless trailblazers who pride themselves on their independence. They refuse to allow themselves to be influenced by others and chafe at the idea of anyone else exerting power over them. They are confident in their abilities and firm in their convictions, unwilling to let the thoughts of others sway where they stand on an issue.

At their best, Type 8s are full of vitality, capable of great things, and able to use their assertiveness and strength to protect those they care about. At their worst, they become closed off and unwilling to trust or be open with the people around them. They can be terrible workaholics, taking on more and more and pushing themselves to the point of physical exhaustion and sickness. They prefer to be in charge, think in absolutes, and believe they are the experts, disliking being told what to do. However, their belief in themselves is not unfounded – when given the chance, 8s make excellent leaders, taking the initiative, never shirking from hard work, and always leading by example.

To learn more about the Challenger, see below for an overview of Type 8 characteristics and the type’s variants, wings, and directions of growth and stress. We’ve also included information about the ideal Type 8 work environment, the types they are most and least compatible with, and a list of some notable Type 8s.

Below, we’ve listed some of the key traits of Enneagram Type 8, the Challenger.

At base, a person’s Enneagram type is a description of their core motives, specific desires, and fears that drive that type’s behavior. Where a type’s desires represent their ideal existence, they fear a life where they are incapable of meeting that ideal.

Each Enneagram type has an associated core fear. The traits associated with a type develop through instinctive avoidance of said fear.

The core fear of the Challenger is powerlessness. Type 8s fear being weak and vulnerable to the control of others. They chafe under any restrictions and respond poorly when others try to exert authority over them.

Each Enneagram type’s core desire corresponds to and is an inverse of their core fears.

The core desire of the Challenger is independence and self-reliance. Type 8s have a deep-seated need to feel in control of themselves, their lives, and their surroundings. They place independence above all else.

Type 8s are tenacious, deeply capable individuals who take on big challenges with vigor and discipline. Their emphasis on independence comes paired with vast inner reserves of energy that allow them to practice what they preach and pursue their goals without being beholden to others.

When their desire for independence goes too far, Type 8s can easily find themselves disconnected from others and on the outskirts of society. Their emphasis on being “strong” sometimes makes Type 8s unwilling to be vulnerable to the point of emotional unavailability. They worry people are going to dislike or reject them, and because of this they rush to beat others to the punch and reject them first, isolating themselves as a form of protection.

While their forthright nature and assertiveness may help them get what they want, it can also serve to make them come off as intimidating and rude. In fact, Type 8s can be both of those things. When they believe people are trying to control them, Type 8s have trouble controlling their tempers, becoming sullen, domineering, and outright aggressive in response.

The nine personality types of the Enneagram model are not rigid descriptions of behavior. While a person’s base type does not change, their personality evolves and even takes on traits from other types in response to changing circumstances in their life.

In the Enneagram diagram, each type is connected to two others which represent that type’s typical directions of stress and growth. 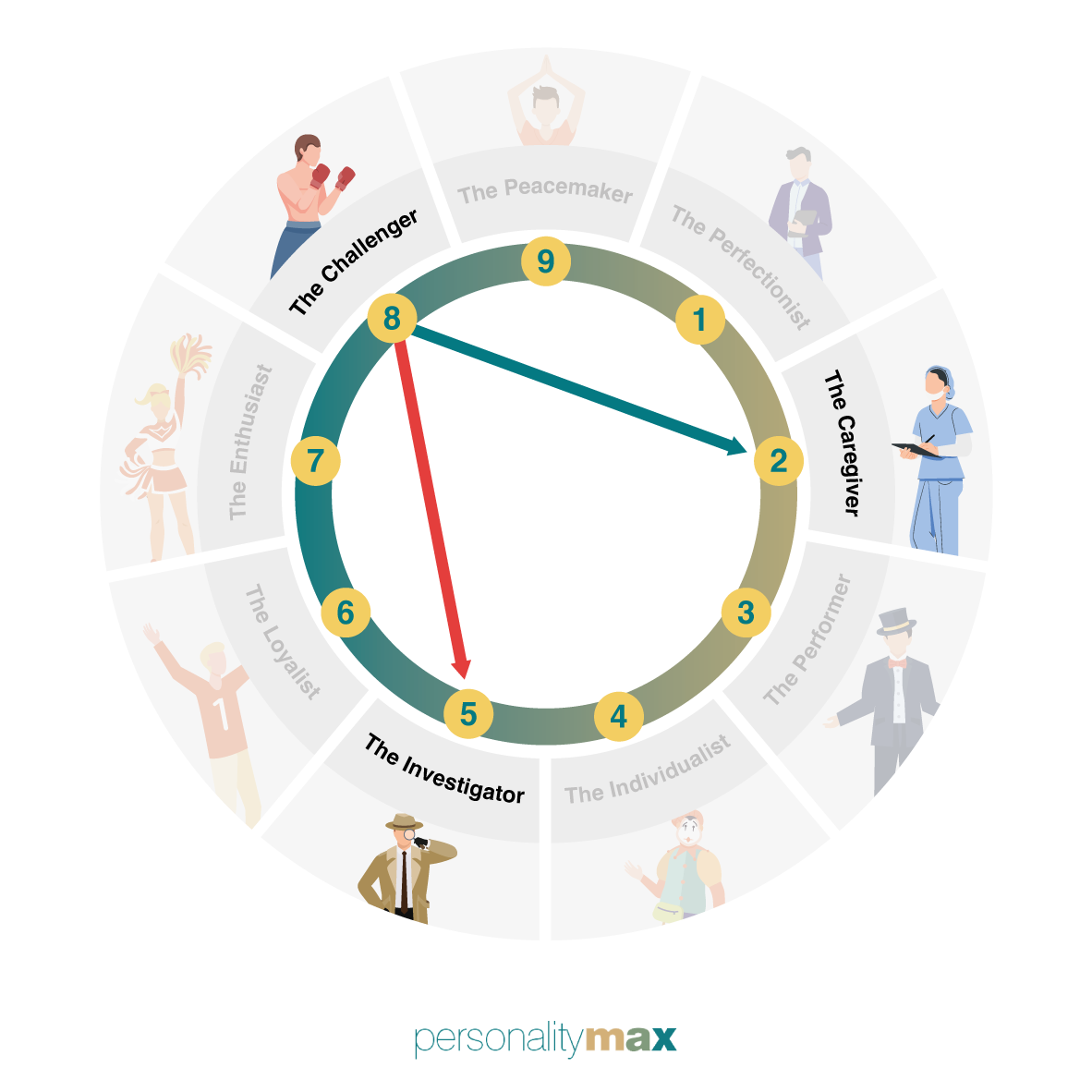 An Enneagram 8 moving in the direction of growth will:

The Challenger will always be a Type 8 at their core, but a healthy 8 that is moving towards growth will be able to channel and make use of these Type 2 strengths in their own way.

When stressed, Challengers may take on negative traits of an unhealthy Enneagram 5, the Investigator.

An Enneagram 8 moving in the direction of stress may:

Some variations on the Enneagram model refer to the three instincts, meaning the self-preservation instinct, the sexual instinct, and the social instinct. All three are inherent human instincts, but every person prioritizes them differently, with their main priority being their “dominant” instinct. Understanding the interplay between your dominant instinct and your Enneagram type can provide helpful insights into your personality and behavior.

The self-preservation (SP) instinct pertains to our need for personal safety and security.

SP 8s fulfill their desire for independence by gaining authority, prestige, and, occasionally, material prosperity. They aspire to possess and exercise control over as many resources as they can to uphold their autonomy and dominance.

Because they approach life with tough-minded objectivity, 8s make excellent entrepreneurs and leaders. When they put their minds on a goal, they do whatever it takes to achieve it without any complaint or explanation. In addition, they are the least expressive of the eight subtypes.

The social (SO) instinct pertains to our need to be part of a community and to feel like we belong.

SO 8s enjoy living lavishly and are always ready for the next social gathering They value friendship and loyalty, and they are prepared to go to tremendous lengths for the people and causes that are close to them. Any topic where they may confidently express their thoughts and engage in disputes excites them.

SO 8s can’t quite comprehend how others can get offended or overwhelmed by the intensity of their beliefs. They can try to tone things down but won’t feel comfortable enough staying silent about something they truly believe in.

The sexual (SX) instinct pertains to our sexuality and our personal relationships.

SX 8s have a magnetic personality and strong emotions. They look for intensity in relationships, and their life’s ups and downs are frequently interpreted in terms of relationships. The goal of the SX 8s is to leave a lasting impression on their partner. They enjoy extreme stimulation and can get addicted to adrenaline rushes, whether we talk about romantic interests or hobbies.

They often see their partner as a child they want to mold and grow, which can lead to multiple issues. A large part of this stems from the SX 8s desire for the partner to be strong so they can eventually unwind and relinquish control.

Because people change in response to life circumstances, there is no single defined set of behaviors that mark out an Enneagram 8. Loyalists will display different facets of their personalities in their average state versus at times when they feel healthier or more unhealthy.

Signs of a Healthy Challenger

Signs of an Average Challenger

Signs of an Unhealthy Challenger

The numbers on either side of an Enneagram type are known as the “wings” of that type. While people will display traits from all nine types at different types, their wings are particularly influential in their behavior. Most people lean towards one of their wings. Enneagram 8s lean either towards their 7 wing, written as “8w7” (8-wing-7), or towards their 9 wing (“8w9”). 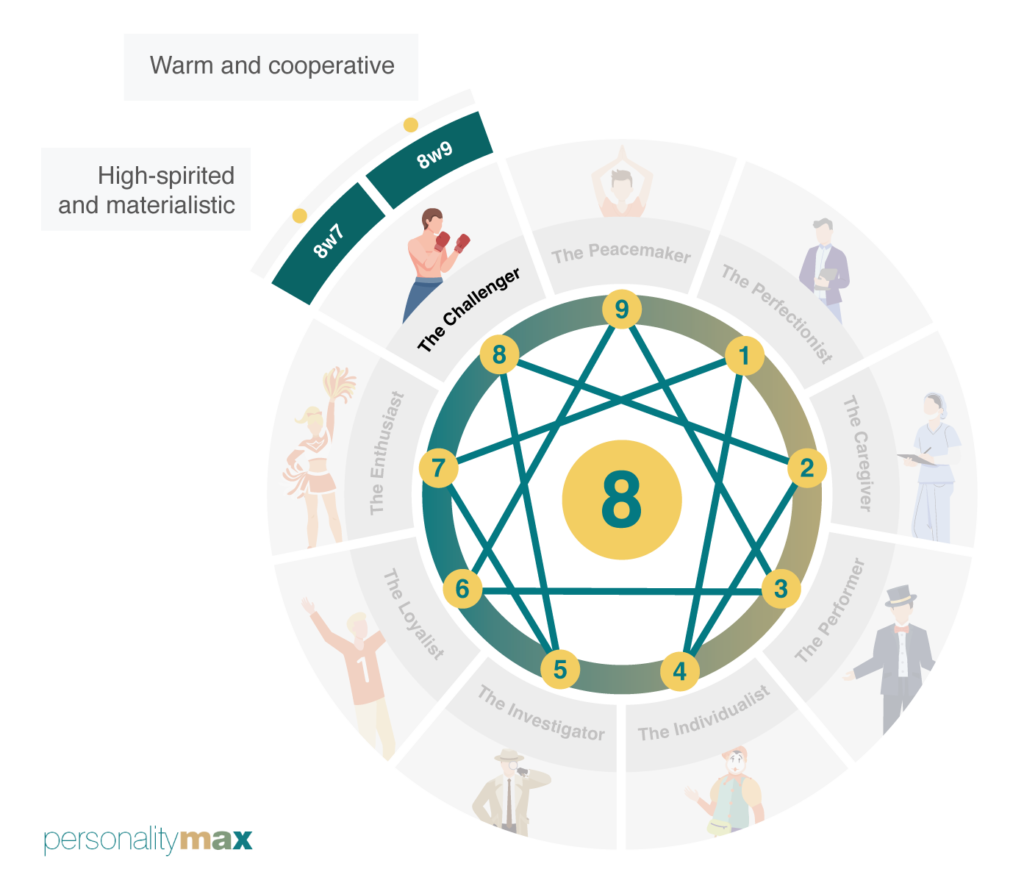 8w7s are usually outgoing, ambitious, and interested in material things. They may be loud, friendly at parties, and often driven by the desire to experience new things. They are creative, idealistic, and bold, willing to take risks.

Their 7 wing helps them see their potential and their core type 8 helps them stay focused on their goals and not get sidetracked by other things that might intrigue them. Because 8w7 want both power and experiences, they work hard and play hard as if they have mastered the art of balancing life and work.

When 9’s passivity and 8’s dominance combine, we get a slow-moving personality capable of becoming unexpectedly aggressive. In contrast to 8w7, who is more likely to ignore a challenge, 8w9 is likewise more likely to display overt rage. Even while 8w9 would rather unwind, it’s critical to get the issue under control first.

8w9s don’t have as much energy as core types or 8w7s, but they are always ready to tackle new obstacles. Thanks to their 9 wing, 8w9s know how to keep their energy under control and enjoy their free time. And even though they are confrontational, they know which battles are worth their time.

8s make excellent leaders due to their strong personalities. They flourish in positions of authority where they can assume control and guide others. Because of their competitive nature, they thrive in any profession with a competitive environment.

Due to their dominant personality, 8s will feel constrained in environments where they are monitored closely by managers. They’re better off avoiding careers that would make them feel insignificant, and their voices wouldn’t be heard. Similarly, 8s are unlikely to succeed in occupations where they do not feel they are contributing to society or leaving a lasting impression.

Enneagram Type 8s excel in roles such as:

Enneagram 8 Compatibility With Other Types

Enneagram 8s are most compatible with other Type 8s, as well as Type 3, the Achiever.

An 8-8 relationship can be one of the best pairings in the Enneagram system. Together, their passion and enthusiasm for life can be transformed into a fruitful union. This couple emanates a sense of true teamwork.

Both partners can unwind and flow into life’s natural flow with an additional eight. Together, they can see the beauty of their surroundings and lessen their vigilant tendencies. By being authentic, this couple may make each other shine.

An 8-3 relationship will make for a passionate and exciting pairing. 3s and 8s are strong-willed and go after what they want in life. They stand out from the crowd in their ways, and they can’t help but notice each other and start to get along. Their union results in two ways: they form a partnership or compete with each other.

They can be charming and self-confident and shift course as necessary when things are not going their way. 3s add a greater sense of empathy, a knack for public relations, and a desire to appease others. 8s are straightforward in communication, courageous, physically enthusiastic, and determined to realize their vision.

Enneagram 8s are least compatible with Type 2, the Helper.

Both types tend to go in different directions and have opposing values. The 2s are more possessive and selfless, while the 8s are tough and aggressive. They might often argue with each other about whose philosophy will win out.

2s can get stuck in a codependent relationship with an 8 out of fear of losing them and being left alone. 2s would often defend and even encourage the 8 to engage in destructive behaviors. They can bring each other down without realizing it, and it might take them a long time to realize that the relationship isn’t working anymore.

Type 8s are leaders, show-stoppers, and one of the most memorable people you’ll ever meet. No wonder some of the most notable celebrities on the following list are 8s.

For Enneagram 8s, it’s of immense importance to demonstrate strength and refrain from displaying weakness. They enjoy being impactful and straightforward, as well as feeling in control. 8s also welcome challenges at any moment in life!

They must understand that their issues stem from their attempts to rebel against society and change it to suit their needs. They are aware that true power requires exposing oneself to risk. If you’re an Eight, remember that you can accomplish more with cooperation and teamwork instead of working alone. Remember, you can get the assistance you need; you just have to be a little more approachable.