The ISTJ personality type is nicknamed the "Examiner" and belongs to the SJ Protector temperament. ISTJs have a keen sense of right and wrong. They are responsible, dependable and loyal. As gifted administrators, they value thoroughness, integrity and honesty. They are practical and believe that work comes before play. ISTJs always have a plan and are prepared. 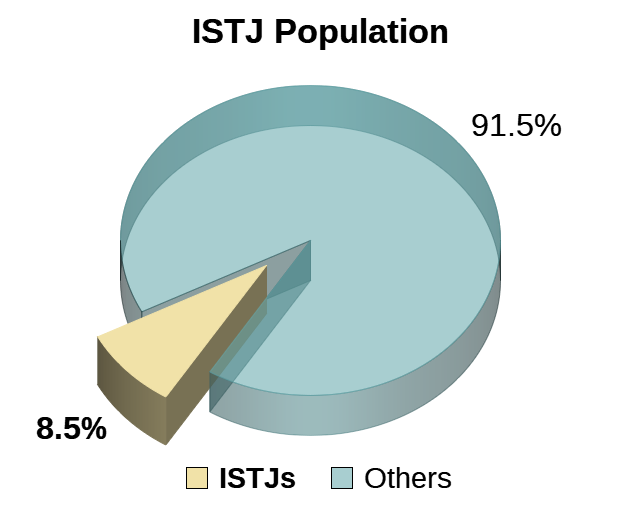 Examiners direct their energy inward. They are private and are energized by spending time alone. They are deliberate and independent. ISTJs usually have a small circle of friends. They are often the type that thinks before they speak. With a preference for Sensing, ISTJs process information through their senses. They are concrete and realistic people. They give attention to detail and live in the present. ISTJs are Thinkers and make decisions with their head. They can be impersonal and firm with others. They are driven by thought and are objective. ISTJs are emotionally controlled. Examiners are structured, scheduled and organized. They seek closure. Completing tasks brings them great satisfaction.

Examiners define caring in terms of loyalty and responsibility. They are dependable and can be counted on. They prefer to observe when they are part of a group. They do not enjoy being the center of attention. On the contrary, Examiners find pleasure in solitude. Although they may be perceived as rigid, ISTJs have a great sense of humor. They often have a reputation of being trustworthy.

"Associate with men of good quality if you esteem your own reputation; for it is better to be alone than in bad company." — George Washington

ISTJs often do well in school. Teachers appreciate their attention to detail and hard work. They do well with subjects that require precision and deliberate observation. They are concrete learners that want to learn practical skills. They are usually not energized by theoretical discussions. Many Examiners enjoy reading.

ISTJs can often be described with these words. They commonly posess the following strengths and weaknesses.

Characteristic of an ISTJ 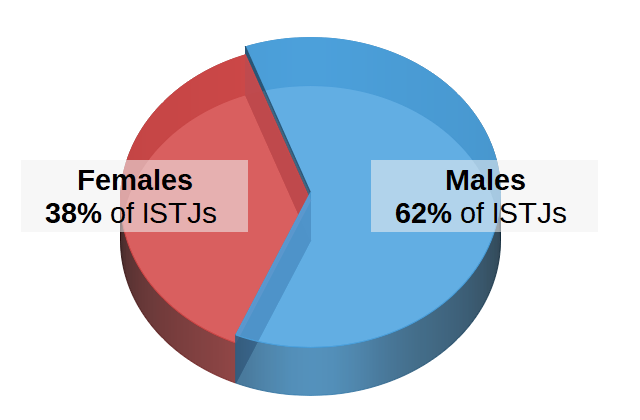 Introversion is characterized by a preference to focus on the inside world. As introverts, ISTJs are energized by spending time alone or with a small, familiar group. They find large group gatherings draining because they seek depth instead of breadth of relationships. Like other introverts, ISTJs process information internally. They are often great listeners.

Thinking prioritizes objectivity. As Thinkers, ISTJs make decisions based on facts. They are ruled by their head instead of their heart (but are not without emotion). ISTJs judge situations and others based on logic. They value truth over tact and can easily identify flaws. They are critical thinkers and oriented toward problem solving.

Sensing focuses on the present. As sensors, ISTJs are "here and now" people. They are factual and process information through the five senses. They see things as they are because they are concrete and literal thinkers. They trust what is certain. ISTJ value realism and common sense. They like ideas with practical applications.

As Judging people, ISTJs think sequentially. They value order and organization. Their lives are scheduled and structured. ISTJs seek closure and enjoy completing tasks. They take deadlines seriously. They work then they play. The Judging preference does not mean judgmental. Judging refers to how a day-to-day activities at dealt with.

Every person engages the world through four Cognitive Functions. The ISTJ's primary function is Introverted Sensing and secondary is Extraverted Thinking.

ISTJs use this function most often. Through Sensing (S), ISTJs process data with their five senses. The Introverted Sensing function allows them to remember data in detail and to compare it with current information. It is the ability to link present experiences to past experiences in search for a connection.

ISTJs use of this function is somewhat high. While Thinking (T), ISTJs make decisions based on logic. The Extraverted Thinking function enables them to organize and categorize items such as thoughts and arguments. It is the ability to see the logical consequences of actions. It follows sequence and organization.

ISTJs use this function but to a lesser degree. When Feeling (F), Examiners make decisions based on feelings, so the Introverted Feeling function allows them to know what they value. It is the ability to see through others and know what they are like as if the ISTJ had internal radar. There is a desire to connect when they identify a person with similar values.

ISTJs use this function least of the four. With Intuition (N), ISTJs process new information through impressions, possibilities and meanings. Extraverted Intuition allows them to see different paths or ways. When an ISTJ receives information, they are able to see that there is more than one way to look at things.

ISTJs take their responsibilities very seriously. They work well with a team but often prefer to work alone. They require structure and clear direction. They avoid stress and confrontation. ISTJs are dutiful and will often avoid taking a break until the work is done.

People with the ISTJ personality type may find satisfaction with the following careers which tend to match well with their Examiner personality.

Here is a sampling of Famous People and Fictional Characters that may share the ISTJ personality type.

Examiners are service-oriented. They strive to help others in whatever role they play. They take responsibility seriously and honor their commitments. They fulfill duties without seeking recognition. The ISTJs greatest contribution is their ability to work hard and to make sacrifices to keep society running smoothly.